The VLT-FLAMES Tarantula Survey. XI. A census of the hot luminous stars and their feedback in 30 Doradus

Context. The VLT-FLAMES Tarantula Survey has an extensive view of the copious number of massive stars in the 30 Doradus (30 Dor) star forming region of the Large Magellanic Cloud. These stars play a crucial role in our understanding of the stellar feedback in more distant, unresolved star forming regions.
Aims: The first comprehensive census of hot luminous stars in 30 Dor is compiled within a 10 arcmin (150 pc) radius of its central cluster, R136. We investigate the stellar content and spectroscopic completeness of the early type stars. Estimates were made for both the integrated ionising luminosity and stellar wind luminosity. These values were used to re-assess the star formation rate (SFR) of the region and determine the ionising photon escape fraction.
Methods: Stars were selected photometrically and combined with the latest spectral classifications. Spectral types were estimated for stars lacking spectroscopy and corrections were made for binary systems, where possible. Stellar calibrations were applied to obtain their physical parameters and wind properties. Their integrated properties were then compared to global observations from ultraviolet (UV) to far-infrared (FIR) imaging as well as the population synthesis code, Starburst99.
Results: Our census identified 1145 candidate hot luminous stars within 150 pc of R136 of which >700 were considered to be genuine early type stars and contribute to feedback. We assess the survey to be spectroscopically complete to 85% in the outer regions (>5 pc) but only 35% complete in the region of the R136 cluster, giving a total of 500 hot luminous stars in the census which had spectroscopy. Only 31 were found to be Wolf-Rayet (W-R) or Of/WN stars, but their contribution to the integrated ionising luminosity and wind luminosity was ~40% and ~50%, respectively. Similarly, stars with Minit > 100 M⊙ (mostly H-rich WN stars) also showed high contributions to the global feedback, ~25% in both cases. Such massive stars are not accounted for by the current Starburst99 code, which was found to underestimate the integrated ionising luminosity of R136 by a factor ~2 and the wind luminosity by a factor ~9. The census inferred a SFR for 30 Dor of 0.073 ± 0.04 M⊙ yr-1. This was generally higher than that obtained from some popular SFR calibrations but still showed good consistency with the far-UV luminosity tracer as well as the combined Hα and mid-infrared tracer, but only after correcting for Hα extinction. The global ionising output was also found to exceed that measured from the associated gas and dust, suggesting that ~6+55-6 % of the ionising photons escape the region.
Conclusions: When studying the most luminous star forming regions, it is essential to include their most massive stars if one is to determine a reliable energy budget. Photon leakage becomes more likely after including their large contributions to the ionising output. If 30 Dor is typical of other massive star forming regions, estimates of the SFR will be underpredicted if this escape fraction is not accounted for. 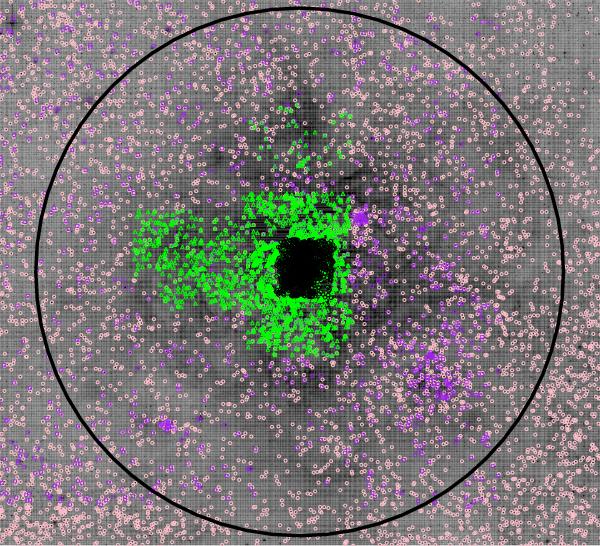