Context. Many studies have shown how galaxy properties (e.g. colours, morphology, star-forming (SF) activity, active galactic nuclei population) change not only with redshift, but also with local galaxy density, revealing the important effect of the stellar/halo mass and the environment in the evolution of galaxies. A detailed analysis of the star formation activity in a representative sample of clusters will help us to understand the physical processes that cause the observed changes.
Aims: We performed a thorough analysis of the star formation activity in the young massive galaxy cluster RX J1257+4738 at z = 0.866, with emphasis on the relationship between the local environment of the cluster galaxies and their star formation activity. We present an optical and infrared (IR) study that benefited from the large amount of data available for this cluster, including new OSIRIS/GTC and Herschel imaging observations.
Methods: Using a multi-wavelength catalogue from the optical to the near-infrared, we measured photometric redshifts through a χ2 spectral energy distribution fitting procedure. We implemented a reliable and carefully chosen cluster membership selection criterion including Monte Carlo simulations and derived a sample of 292 reliable cluster member galaxies for which we measured the following properties: optical colours, stellar masses, ages, ultraviolet luminosities and local densities. Using the MIPS 24 μm and Herschel data, we measured total IR luminosities and star formation rates (SFRs).
Results: Of the sample of 292 cluster galaxies, 38 show far-infrared (FIR) emission with an SFR between 0.5 and 45 M⊙ yr-1. The spatial distribution of the FIR emitters within the cluster density map and the filament-like overdensities observed suggest that RX J1257 is not virialised, but is in the process of assembly. The average star formation as a function of the cluster environment parametrised by the local density of galaxies does not show any clear trend. However, the fraction of SF galaxies unveils that the cluster intermediate-density regions is preferred for the SF activity to enhance, since we observe a significant increase of the FIR-emitter fraction in this environment. The analysis of the extinction distributions of the optically red and blue SF galaxies supports the assumption of the red SF galaxies as a dusty population. 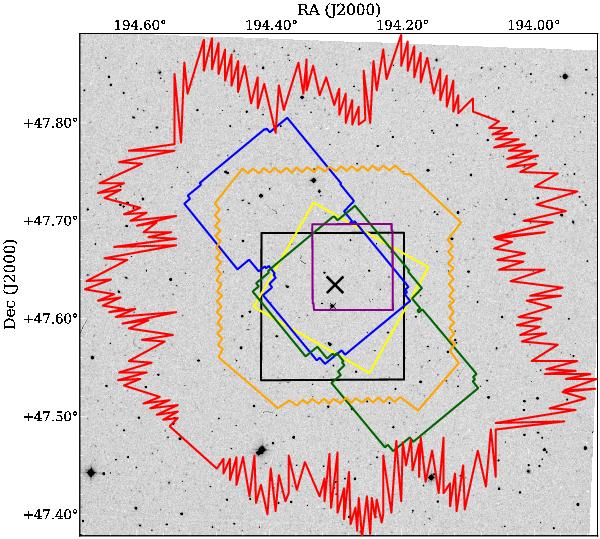