We present simultaneous SDO AIA and Hinode EIS observations of the hot cores of active regions (ARs) and assess the dominant contributions to the AIA EUV bands. This is an extension of our previous work. We find good agreement between SDO AIA, EVE and EIS observations, using our new EIS calibration and the latest EVE v.3 data. We find that all the AIA bands are multi-thermal, with the exception of the 171 and 335 Å, and provide ways to roughly estimate the main contributions directly from the AIA data. We present and discuss new atomic data for the AIA bands, showing that they are now sufficiently complete to obtain temperature information in the cores of ARs, with the exception of the 211 Å band. We found that the newly identified Fe xiv 93.61 Å line is the dominant contribution to the 94 Å band, whenever Fe xviii is not present. Three methods to estimate the Fe xviii emission in this band are presented, two using EIS and one directly from the AIA data. Fe xviii emission is often present in the cores of ARs, but we found cases where it is formed at 3 MK and not 7 MK, the temperature of peak ion abundance in equilibrium. The best EIS lines for elemental abundance determination and differential emission measure (DEM) analysis are discussed. A new set of abundances for many elements are obtained from EIS observations of hot 3 MK loops. The abundances of the elements with low first ionisation potential (FIP), relative to those of the high-FIP elements, are found to be enhanced by about a factor of three, compared to the photospheric values. A measurement of the path length implies that the absolute abundances of the low-FIP elements are higher than the photospheric values by at least a factor of three. We present a new DEM method customised for the AIA bands, to study the thermal structure of ARs at 1'' resolution. This was tested on a few ARs, including one observed during the Hi-C rocket flight. We found excellent agreement between predicted and observed AIA count rates and EIS radiances. Overall we found few differences between the AIA and Hi-C 193 Å images of coronal structures, despite the higher Hi-C resolution (0.25''). The Hi-C images and the AIA DEM modelling suggest that some of the cooler loops (below 1 MK) are already resolved by AIA, while the hotter (1.5-2.5 MK) "background" emission is in most places still unresolved even at the Hi-C resolution. This unresolved emission is significantly lower than previously observed with TRACE, the SOHO CDS, and Hinode EIS spectrometers. Its enhancement appears to be mostly due to increased iron abundance. We find an ubiquitous presence of emission at different temperatures that is not co-spatial, and suggest that future high-resolution imaging is carried out with isothermal bands. 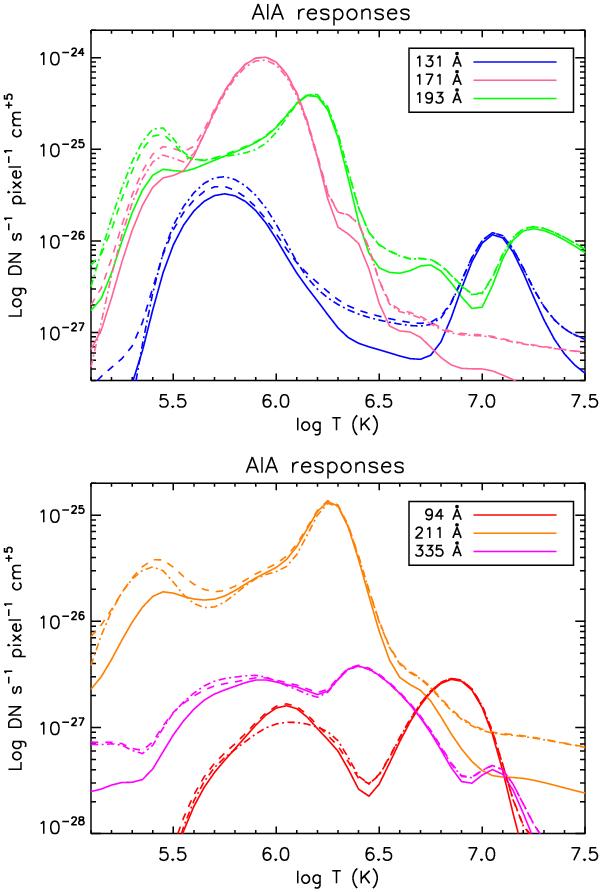