Context. Over the past five years, radial-velocity and transit techniques have revealed a new population of Earth-like planets with masses of a few Earth masses. Their very close orbit around their host star requires an exquisite inner working angle to be detected in direct imaging and sets a challenge for direct imagers that work in the visible range, such as SPHERE/ZIMPOL.
Aims: Among all known exoplanets with less than 25 Earth masses we first predict the best candidate for direct imaging. Our primary objective is then to provide the best instrument setup and observing strategy for detecting such a peculiar object with ZIMPOL. As a second step, we aim at predicting its detectivity.
Methods: Using exoplanet properties constrained by radial velocity measurements, polarimetric models and the diffraction propagation code CAOS, we estimate the detection sensitivity of ZIMPOL for such a planet in different observing modes of the instrument. We show how observing strategies can be optimized to yield the best detection performance on a specific target.
Results: In our current knowledge of exoplanetary systems, α Centauri B b is the most promising target with less than 25 Earth masses for ZIMPOL. With a gaseous Rayleigh-scattering atmosphere and favorable inclinations, the planet could be detected in about four hours of observing time, using the four-quadrant phase-mask coronograph in the I band. However, if α Centauri B b should display unfavorable polarimetric and reflective properties similar to that of our Moon, it is around 50 times fainter than the best sensitivity of ZIMPOL.
Conclusions: α Centauri B is a primary target for SPHERE. Dedicated deep observations specifically targeting the radial velocity-detected planet can lead to a detection if the polarimetric properties of the planet are favorable. 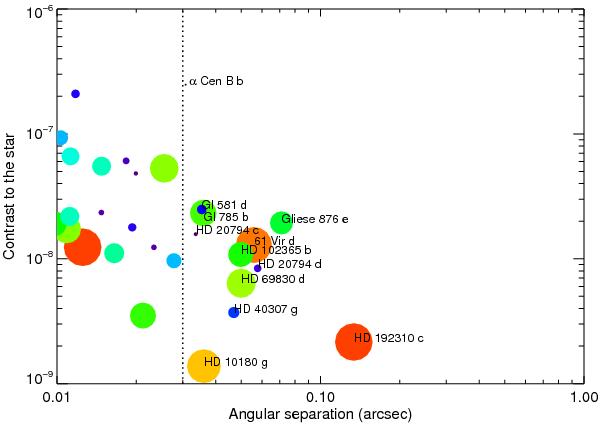