The spectroscopic evolution of the γ-ray emitting classical nova Nova Mon 2012. I. Implications for the ONe subclass of classical novae


Aims: Among the classical novae, the ONe subgroup, distinguished by their large overabundance of neon, are thought to occur on the most massive white dwarfs. Nova Mon 2012 was the first classical nova to be detected as a high energy γ-ray transient, by Fermi-LAT, before its optical discovery. The first optical spectra obtained about 55 days after γ-ray peak, were strikingly similar to the ONe class after the transition to the nebular (optically thin) spectrum. The current paper presents our subsequent optical and ultraviolet observations.
Methods: A time sequence of optical echelle spectra (3700-7400 Å) with the Nordic Optical Telescope (NOT) began on 2012 Aug. 16, immediately following the optical announcement, and are continuing. The nova was observed almost simultaneously with the NOT on 2012 Nov. 21, with the Space Telescope Imaging Spectrograph (STIS) aboard the Hubble Space Telescope at medium echelle resolution (1150-3050 Å) on Nov. 20, and with the CHIRON CTIO/SMARTS echelle spectrograph at medium resolution (4500-8900 Å) on Nov. 22. We used plasma diagnostics (e.g. [O III] and Hβ line flux) to constrain electron densities and temperatures, and the filling factor, for the ejecta. Using Monte Carlo modeling, we derived the structure from comparisons to the optical and ultraviolet line profiles. We also compared observed fluxes for Nova Mon 2012 with those predicted by photoionization modeling with Cloudy using element abundances derived for other ONe novae, the parameters derived from the line profile modeling and multiwavelength continuum measurements.
Results: Nova Mon 2012 is confirmed as an ONe nova first observed spectroscopically in the nebular stage. We derive an extinction of E(B - V) = 0.85 ± 0.05 and hydrogen column density NH ≈ 5 × 1021 cm-2. The corrected continuum luminosity is nearly the same in the entire observed energy range compared to V1974 Cyg, V382 Mon, and Nova LMC 2000 at the same epoch after outburst. The distance, about 3.6 kpc, is quite similar to V1974 Cyg, suggesting that it would have been equally bright had it been observed at maximum light. The same applies to the line profiles. These can be modeled using an axisymmetric conical - bipolar - geometry for the ejecta with various inclinations of the axis to the line of sight, i, and ejecta inner radii. For Nova Mon 2012, we find that 60 ≤ i ≤ 80 degrees, an opening angle of ≈70°, and an inner radius ΔR/R(t) ≈ 0.4 matches the permitted and intercombination lines while the forbidden lines require a less filled structure. The filling factor is f ≈ 0.1 - 0.3, although it may be lower based on the structures observed in the emission line profiles, implying an ejecta mass ≤ 6 × 10-5 M⊙. The abundances are similar to, but not identical to, V1974 Cyg and V382 Vel. In particular, Ne and Mg are apparently more abundant in Nova Mon 2012.
Conclusions: The ONe novae appear to comprise a single physical class with bipolar high mass ejecta, similarly enhanced abundances, and a common spectroscopic evolution within a narrow range of luminosities. The spectral evolution does not require continued mass loss from the post-explosion white dwarf. This also implies that the detected γ-ray emission is a generic phenomenon, common to all ONe novae, possibly to all classical novae, and connected with acceleration and emission processes within the ejecta. 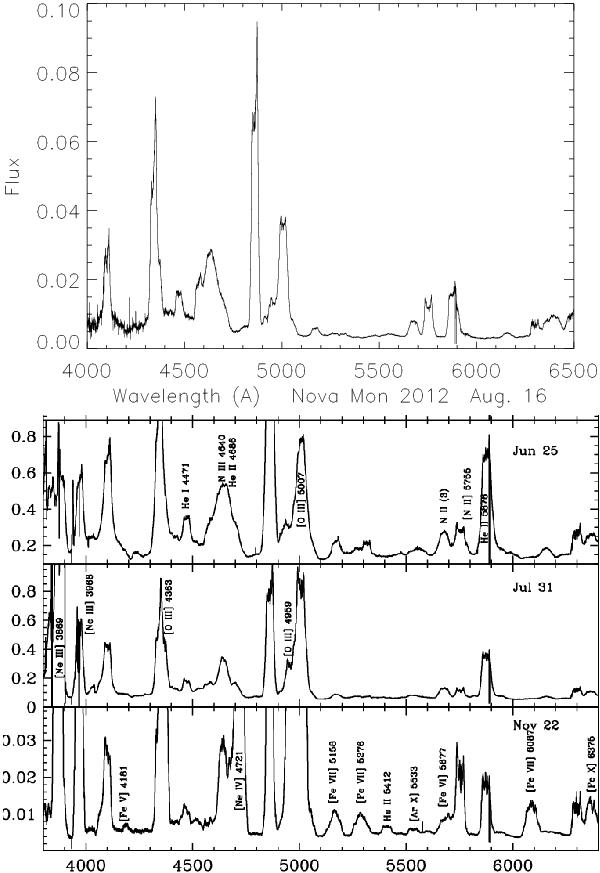