A survey of young, nearby, and dusty stars conducted to understand the formation of wide-orbit giant planets. VLT/NaCo adaptive optics thermal and angular differential imaging

Context. Over the past decade, direct imaging has confirmed the existence of substellar companions on wide orbits from their parent stars. To understand the formation and evolution mechanisms of these companions, their individual as well as the full population properties must be characterized.
Aims: We aim at detecting giant planet and/or brown dwarf companions around young, nearby, and dusty stars. Our goal is also to provide statistics on the population of giant planets at wide-orbits and discuss planet formation models.
Methods: We report the results of a deep survey of 59 stars, members of young stellar associations. The observations were conducted with the ground-based adaptive optics system VLT/NaCo at L'-band (3.8 μm). We used angular differential imaging to reach the best detection performances down to the planetary mass regime. A statistical analysis of about 60% of the young and southern A-F stars closer than 65 pc allowed us to derive the fraction of giant planets on wide orbits. We used gravitational instability models and planet population synthesis models following the core-accretion scenario to discuss the occurrence of these companions.
Results: We resolve and characterize new visual binaries and do not detect any new substellar companion. The survey's median detection performance reaches contrasts of 10 mag at 0.5″ and 11.5 mag at 1.0″. We find the occurrence of planets to be between 10.8 and 24.8% at 68% confidence level assuming a uniform distribution of planets in the interval [1,13] MJ and [1,1000] AU. Considering the predictions of planetary formation models, we set important constraints on the occurrence of massive planets and brown dwarf companions that would have formed by gravitational instability. We show that this mechanism favors the formation of rather massive clumps (Mclump > 30 MJ) at wide (a > 40 AU) orbits, which may evolve dynamically and/or fragment. For the population of close-in giant planets that would have formed by core accretion (without considering any planet - planet scattering), our survey marginally explores physical separations (≤20 AU) and cannot constrain this population. We will have to wait for the next generation of planet finders to start exploring that population, and even for the extremely large telescopes for a more complete overlap with other planet-hunting techniques. 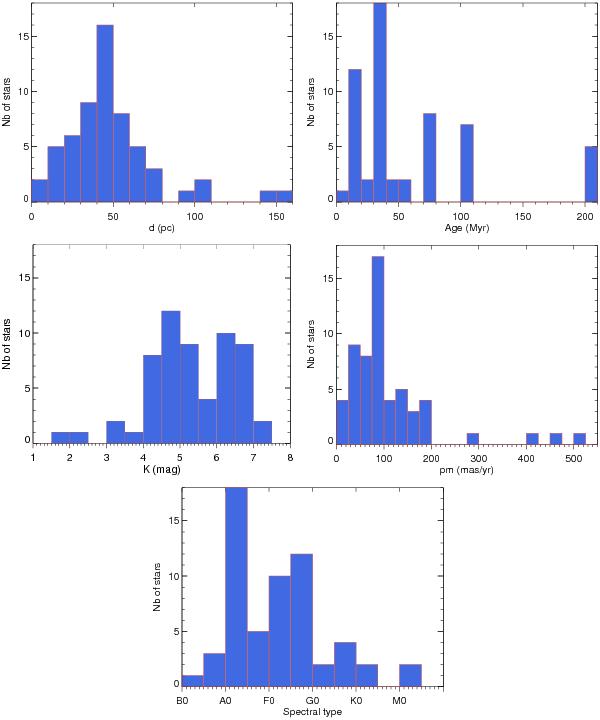