The evolution of an isolated over-density represents a useful toy model to test the accuracy of a cosmological N-body code in the non-linear regime as it is approximately equivalent to that of a truly isolated cloud of particles, with same density profile and velocity distribution, in a non-expanding background. This is the case as long as the system size is smaller than the simulation box side, so that its interaction with the infinite copies can be neglected. In such a situation, the over-density rapidly undergoes to a global collapse forming a quasi stationary state in virial equilibrium. However, by evolving the system with a cosmological code (GADGET) for a sufficiently long time, a clear deviation from such quasi-equilibrium configuration is observed. This occurs in a time tLI that depends on the values of the simulation numerical parameters such as the softening length and the time-stepping accuracy, i.e. it is a numerical artifact related to the limited spatial and temporal resolutions. The analysis of the Layzer-Irvine cosmic energy equation confirms that this deviation corresponds to an unphysical dynamical regime. By varying the numerical parameters of the simulation and the physical parameters of the system we show that the unphysical behaviour originates from badly integrated close scatterings of high-velocity particles. We find that, while the structure may remain virialized in the unphysical regime, its density and velocity profiles are modified with respect to the quasi-equilibrium configurations, converging, however, to well defined shapes, the former characterised by a Navarro Frenk White-type behaviour. 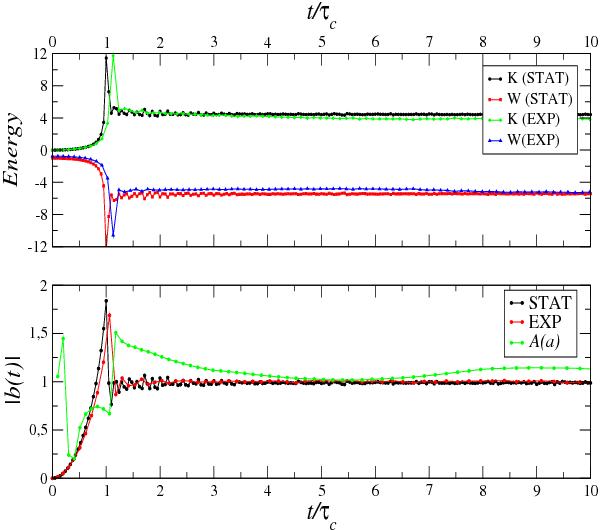