Context. The Swift satellite is a multi-wavelength observatory specifically designed for gamma-ray burst (GRB) astronomy that is operational since 2004. Swift is also a very flexible multi-purpose facility that supports a wide range of scientific fields such as active galactic nuclei, supernovae, cataclysmic variables, Galactic transients, active stars and comets. The Swift X-ray Telescope (XRT) has collected more than 150 Ms of observations in its first seven years of operations.
Aims: The purpose of this work is to present to the scientific community the list of all the X-ray point sources detected in XRT imaging data taken in photon counting mode during the first seven years of Swift operations. All these point-like sources, excluding the GRB, will be stored in a catalog publicly available (1SWXRT).
Methods: We considered all the XRT observations with exposure time longer than 500 s taken in the period 2005-2011. Data were reduced and analyzed with standard techniques and a list of detected sources for each observation was produced. A careful visual inspection was performed to remove extended, spurious and piled-up sources. Finally, positions, count rates, fluxes, and the corresponding uncertainties were computed.
Results: We have analyzed more than 35 000 XRT fields, with exposures ranging between 500 s and 100 ks, for a total exposure time of almost 140 Ms. The catalog includes approximately 89 000 entries, of which almost 85 000 are not affected by pile-up and are not GRBs. Considering that many XRT fields were observed several times, we have a total of ~36 000 distinct celestial sources. We computed count rates in three energy bands: 0.3-10 keV (Full, or F), 0.3-3 keV (Soft, or S) and 2-10 keV (Hard, or H). Each entry has a detection in at least one of these bands. In particular, we detect ~80 000, ~70 000 and ~25 500 in the F, S and H band, respectively. Count rates were converted into fluxes in the 0.5-10, 0.5-2 and 2-10 keV bands. The flux interval sampled by the detected sources is 7.4 × 10-15 - 9.1 × 10-11, 3.1 × 10-15 - 1.1 × 10-11 and 1.3 × 10-14 - 9.1 × 10-11 erg cm-2 s-1 for the F, S and H band, respectively. Some possible scientific uses of the catalog are also highlighted. 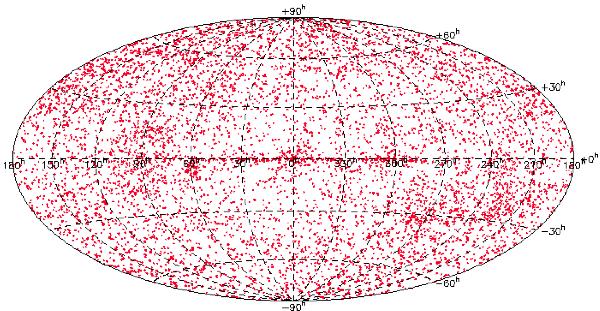