Aims: We present the first Doppler imaging study of the two rapidly rotating, single K-giants DP CVn and DI Psc in order to study the surface spot configuration and to pinpoint their stellar evolutionary status.
Methods: Optical spectroscopy and photometry were used to determine the fundamental astrophysical properties. Doppler imaging was applied to recover the surface temperature distribution for both stars, while photometric light-curve inversions were carried out for studying the long-term changes of the surface activity of DP CVn. Surface differential rotation of DP CVn was estimated from cross-correlating the available subsequent Doppler reconstructions separated by roughly one rotation period.
Results: Both stars appear to have higher than normal lithium abundance, LTE log n of 2.28 (DP CVn) and 2.20 (DI Psc), and are supposed to be located at the end of the first Li dredge-up on the RGB. Photometric observations reveal rotational modulation with a period of 14.010 d (DP CVn) and 18.066 d (DI Psc). Doppler reconstructions from the available mapping lines well agree in the revealed spot patterns, recovering rather low latitude spots for both stars with temperature contrasts of ∆T ≈ 600-800 K below the unspotted photospheric background. Spots at higher latitudes are also found but either with less contrast (DP CVn) or with smaller extent (DI Psc). A preliminary antisolar-type differential rotation with α = -0.035 is found for DP CVn from cross-correlating the subsequent Doppler images. Long-term photometric analysis supports the existence of active longitudes, as well as the differential rotation.

Based on observations obtained at the Kitt Peak National Observatory, USA, and at the Canada-France-Hawaii Telescope, USA.Tables 1 and 2 are only available in electronic form at http://www.aanda.orgPhotometric data summarized in Table 2 are available in electronic form at the CDS via anonymous ftp to cdsarc.u-strasbg.fr (130.79.128.5) or via http://cdsarc.u-strasbg.fr/viz-bin/qcat?J/A+A/551/A2 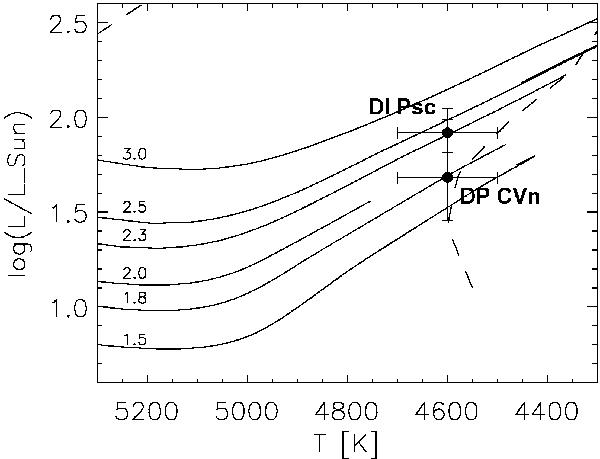