The Rossiter-McLaughlin (hereafter RM) effect is a key tool for measuring the projected spin-orbit angle between stellar spin axes and orbits of transiting planets. However, the measured radial velocity (RV) anomalies produced by this effect are not intrinsic and depend on both instrumental resolution and data reduction routines. Using inappropriate formulas to model the RM effect introduces biases, at least in the projected velocity Vsini⋆ compared to the spectroscopic value. Currently, only the iodine cell technique has been modeled, which corresponds to observations done by, e.g., the HIRES spectrograph of the Keck telescope. In this paper, we provide a simple expression of the RM effect specially designed to model observations done by the Gaussian fit of a cross-correlation function (CCF) as in the routines performed by the HARPS team. We derived a new analytical formulation of the RV anomaly associated to the iodine cell technique. For both formulas, we modeled the subplanet mean velocity vp and dispersion βp accurately taking the rotational broadening on the subplanet profile into account. We compare our formulas adapted to the CCF technique with simulated data generated with the numerical software SOAP-T and find good agreement up to Vsini⋆ ≲ 20 km s-1. In contrast, the analytical models simulating the two different observation techniques can disagree by about 10σ in Vsini⋆ for large spin-orbit misalignments. It is thus important to apply the adapted model when fitting data. 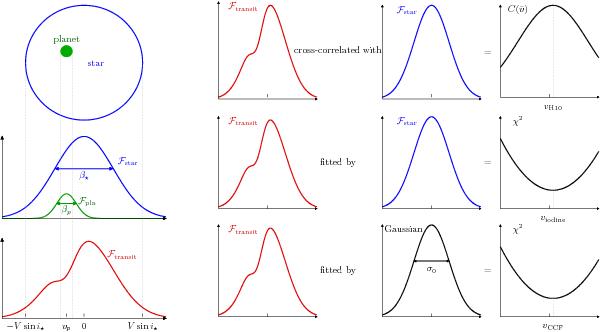