Aims: We aim to study the dust ejected by main-belt comet (MBC) (300163) 2006 VW139 to obtain information on the ejection mechanism and the spectral properties of the object. This will help to see if they are compatible with those of "normal" comets.
Methods: Broad-band images in the g and r band as well as a low-resolution spectrum in the 0.35-0.9 μm region were obtained with the GTC telescope (Roque de los Muchachos Observatory, La Palma, Spain). Images were analyzed to produce a color map and derive a lower limit of the absolute magnitude H. A Monte Carlo scattering model was used to derive dust properties such as mass loss rates and ejection velocities as a function of time. The reflectance spectrum was compared to that of the well-studied MBC 133P/ Elst-Pizarro. The spectrum was also used to search for CN emission and to determine the upper limit of the CN production rate.
Results: The reflectance spectrum of 2006 VW139 is typical of a C-class asteroid, with a spectral slope S'V = 0.5 ± 1.0%/1000 Å. It is similar to the spectrum of 133P and other MBCs. No CN emission is detected in the spectrum. A CN production rate upper limit of 3.76 × 1023 s-1 is derived. Images show that the MBC present a narrow almost linear tail that extends up to 40 000 km in the anti-solar direction and more than 80 000 km in the direction of the object's orbital plane. The color of the tail is slightly redder than the Sun (S' between 3-6%/1000 Å). The Monte Carlo dust tail model derived the mass loss rates and ejection velocity as a function of time, and the results show that the activity onset occurs shortly after perihelion, and lasts about 100 days; the total ejected mass is ~2 × 106 kg.
Conclusions: The spectrum of 2006 VW139 suggests that it is not a "normal" comet. The spectrum is typical of the other observed MBCs. Even if no CN emission is detected, the more likely activation mechanism is water-ice sublimation. Like other well studied MBCs, (300163) 2006 VW139 is likely a primitive C-class asteroid that has a water-ice subsurface depth reservoir that has recently been exposed to sunlight or to temperatures that produce enough heat to sublime the ice. 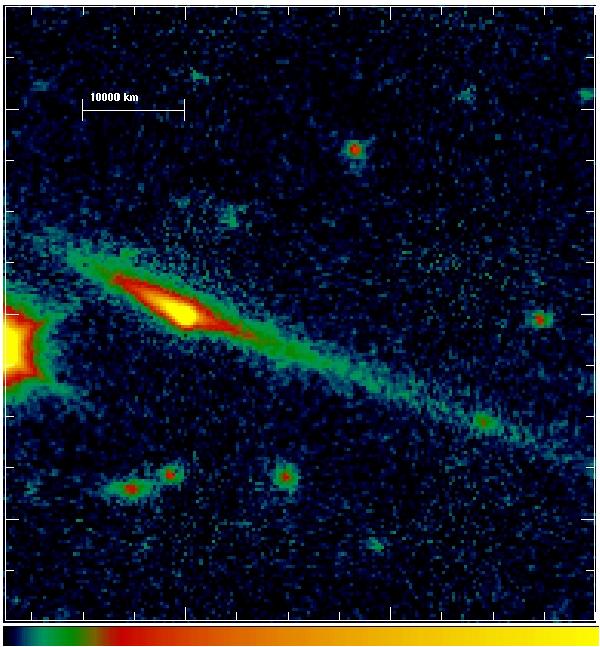