A sensitive survey for 13CO, CN, H2CO, and SO in the disks of T Tauri and Herbig Ae stars


Aims: We investigate the suitability of several molecular tracers, in particular CN N = 2-1 line emission, as a confusion-free probe of the kinematics of circumstellar disks.
Methods: We use the IRAM 30-m telescope to perform a sensitive search for CN N = 2-1 in 42 T Tauri or Herbig Ae systems located principally in the Taurus-Auriga region. 13CO J = 2-1 is observed simultaneously to provide an indication of the level of confusion with the surrounding molecular cloud. The bandpass also contains two transitions of ortho-H2CO, one of SO and the C17O J = 2-1 line which provide complementary information on the nature of the emission.
Results: While 13CO is in general dominated by residual emission from the cloud, CN exhibits a high disk detection rate >50% in our sample. We even report CN detection in stars for which interferometric searches failed to detect 12CO, presumably because of obscuration by a foreground, optically thick, cloud. Comparison between CN and o-H2CO or SO line profiles and intensities divide the sample in two main categories. Sources with SO emission are bright and have strong H2CO emission, leading in general to [H2CO/CN] > 0.5. Furthermore, their line profiles, combined with a priori information on the objects, suggest that the emission is coming from outflows or envelopes rather than from a circumstellar disk. On the other hand, most sources have [H2CO/CN] < 0.3, no SO emission, and some of them exhibit clear double-peaked profiles characteristics of rotating disks. In this second category, CN is likely tracing the proto-planetary disks. From the line flux and opacity derived from the hyperfine ratios, we constrain the outer radii of the disks, which range from 300 to 600 AU. The overall gas disk detection rate (including all molecular tracers) is ~ 68%, and decreases for fainter continuum sources.
Conclusions: The current study demonstrates that gas disks, like dust disks, are ubiquitous around young PMS stars in regions of isolated star formation, and that a large fraction of them have Rout ≳ 300 AU. It also shows the potential of the CN N = 2-1 transition to probe the kinematics of these disks, thereby measuring the stellar mass, using high resolution observations with ALMA.

Based on observations carried out with the IRAM 30-m telescope. IRAM is supported by INSU/CNRS (France), MPG (Germany) and IGN (Spain).Appendices are available in electronic form at http://www.aanda.org 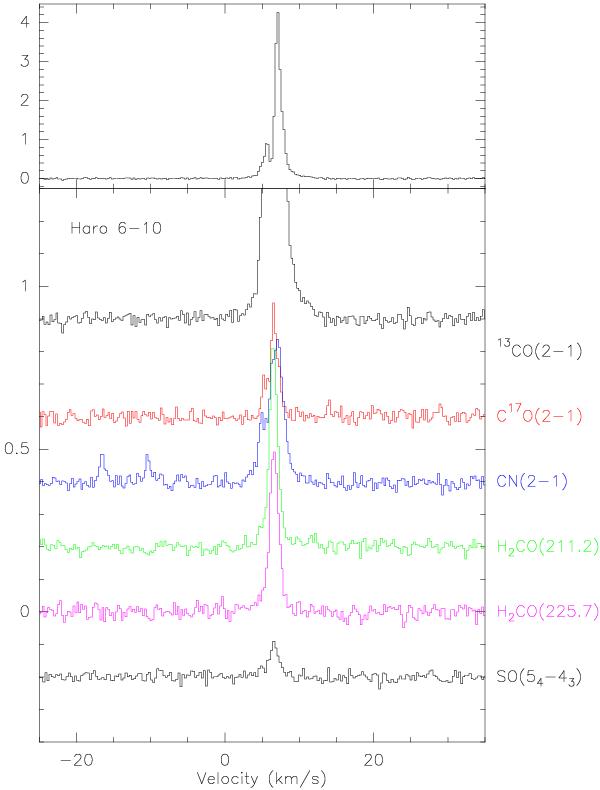