We describe a new method of extracting the spectra of stars from observations of crowded stellar fields with integral field spectroscopy (IFS). Our approach extends the well-established concept of crowded field photometry in images into the domain of 3-dimensional spectroscopic datacubes. The main features of our algorithm follow. (1) We assume that a high-fidelity input source catalogue already exists, e.g. from HST data, and that it is not needed to perform sophisticated source detection in the IFS data. (2) Source positions and properties of the point spread function (PSF) vary smoothly between spectral layers of the datacube, and these variations can be described by simple fitting functions. (3) The shape of the PSF can be adequately described by an analytical function. Even without isolated PSF calibrator stars we can therefore estimate the PSF by a model fit to the full ensemble of stars visible within the field of view. (4) By using sparse matrices to describe the sources, the problem of extracting the spectra of many stars simultaneously becomes computationally tractable. We present extensive performance and validation tests of our algorithm using realistic simulated datacubes that closely reproduce actual IFS observations of the central regions of Galactic globular clusters. We investigate the quality of the extracted spectra under the effects of crowding with respect to the resulting signal-to-noise ratios (S/N) and any possible changes in the continuum level, as well as with respect to absorption line spectral parameters, radial velocities, and equivalent widths. The main effect of blending between two nearby stars is a decrease in the S/N in their spectra. The effect increases with the crowding in the field in a way that the maximum number of stars with useful spectra is always ~0.2 per spatial resolution element. This balance breaks down when exceeding a total source density of one significantly detected star per resolution element. We also explore the effects of PSF mismatch and other systematics. We close with an outlook by applying our method to a simulated globular cluster observation with the upcoming MUSE instrument at the ESO-VLT.

Based on observations collected at the Centro Astronómico Hispano Alemán (CAHA) at Calar Alto, operated jointly by the Max-Planck Institut für Astronomie and the Instituto de Astrofísica de Andalucía (CSIC).Based on observations made with the NASA/ESA Hubble Space Telescope, and obtained from the Hubble Legacy Archive, which is a collaboration between the Space Telescope Science Institute (STScI/NASA), the Space Telescope European Coordinating Facility (ST-ECF/ESA), and the Canadian Astronomy Data Centre (CADC/NRC/CSA). 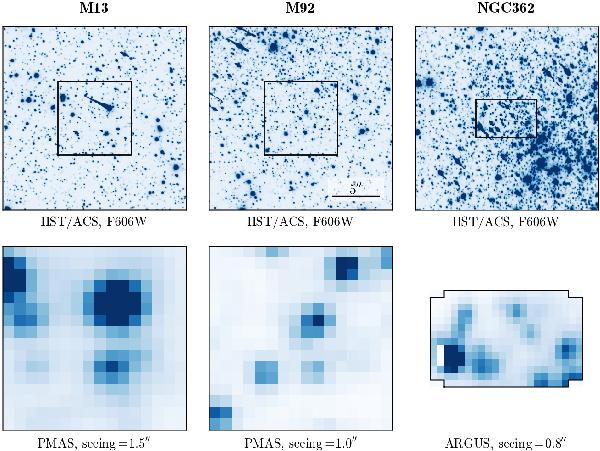