Young stars in ∊ Chamaleontis and their disks: disk evolution in sparse associations

Context. The nearby young stellar association ∊ Cha has an estimated age of 3-5 Myr, making it an ideal laboratory to study the disk dissipation process and provide empirical constraints on the timescale of planet formation.
Aims: We wish to complement existing optical and near-infrared data of the ∊ Cha association, which provide the stellar properties of its members, with mid-infrared data that probe the presence, geometry, and mineralogical composition of protoplanetary disks around individual stars.
Methods: We combine the available literature data with our Spitzer/IRS spectroscopy and VLT/VISIR imaging data. We use proper motions to refine the membership of ∊ Cha. Masses and ages of individual stars are estimated by fitting model atmospheres to the optical and near-infrared photometry, followed by placement in the Hertzsprung-Russell diagram. The Spitzer/IRS spectra are analyzed using the two-layer temperature distribution spectral decomposition method.
Results: Two stars previously identified as members, CXOU J120152.8 and 2MASS J12074597, have proper motions that are very different from those of the other stars. But other observations suggest that the two stars are still young and thus might still be related to ∊ Cha. HD 104237C is the lowest mass member of ∊ Cha with an estimated mass of ~13-15 Jupiter masses. The very low mass stars USNO-B120144.7 and 2MASS J12005517 show globally depleted spectral energy distributions, pointing at strong dust settling. 2MASS J12014343 may have a disk with a very specific inclination, where the central star is effectively screened by the cold outer parts of a flared disk, but the 10 μm radiation of the warm inner disk can still reach us. We find that the disks in sparse stellar associations are dissipated more slowly than those in denser (cluster) environments. We detect C2H2 rovibrational band around 13.7 μm on the IRS spectrum of USNO-B120144.7. We find strong signatures of grain growth and crystallization in all ∊ Cha members with 10 μm features detected in their IRS spectra. We combine the dust properties derived in the ∊ Cha sample with those found using identical or similar methods in the MBM 12, Coronet, η Cha associations, and in the cores-to-disks legacy program. We find that disks around low-mass young stars show a negative radial gradient in the mass-averaged grain size and mass fraction of crystalline silicates. A positive correlation exists between the mass-averaged grain sizes of amorphous silicates and the accretion rates if the latter is above ~10-9 M☉ yr-1, possibly indicating that those disks are sufficiently turbulent to prevent grains of several microns in size to sink into the disk interior.

Based on observations performed at ESO's La Silla-Paranal observatory under programme 076.C-0470. 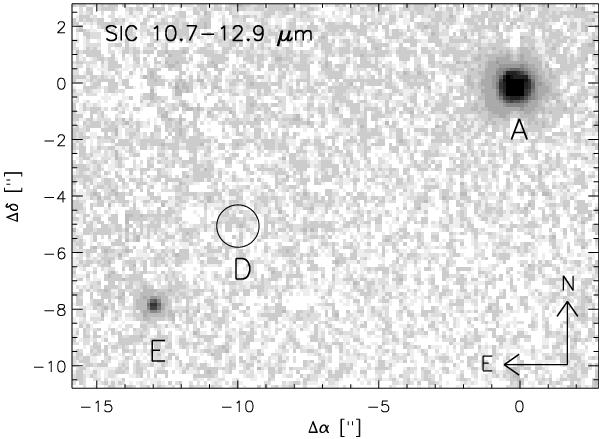