We investigate the interaction of three consecutive large-scale coronal waves with a polar coronal hole, simultaneously observed on-disk by the Solar TErrestrial Relations Observatory (STEREO)-A spacecraft and on the limb by the PRoject for On-Board Autonomy 2 (PROBA2) spacecraft on January 27, 2011. All three extreme-ultraviolet(EUV) waves originate from the same active region NOAA 11149 positioned at N30E15 in the STEREO-A field-of-view and on the limb in PROBA2. We derive for the three primary EUV waves start velocities in the range of ~310 km/s for the weakest up to ~500 km/s for the strongest event. Each large-scale wave is reflected at the border of the extended coronal hole at the southern polar region. The average velocities of the reflected waves are found to be smaller than the mean velocities of their associated direct waves. However, the kinematical study also reveals that in each case the end velocity of the primary wave matches the initial velocity of the reflected wave. In all three events the primary and reflected waves obey the Huygens-Fresnel principle, as the incident angle with ~10° to the normal is of the same size as the angle of reflection. The correlation between the speed and the strength of the primary EUV waves, the homologous appearance of both the primary and the reflected waves, and in particular the EUV wave reflections themselves implicate that the observed EUV transients are indeed nonlinear large-amplitude MHD waves. 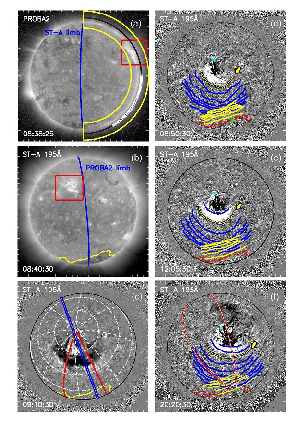