In this paper, the current best estimate of a fundamental Galactic parameter Galactocentric distance of the Sun $R_0$ has been evaluated using all the available estimates published during the last 20 years. Unlike some other studies, our analysis of these results showed no statistically significant trend in $R_0$ during this period. However we revealed a statistically valuable improvement in the $R_0$ uncertainties with time of about 0.2 kpc for 20 years. Several statistical techniques have been used and compared to obtain the most reliable common mean of 52 determinations made in 1992--2011 and its realistic uncertainty. The statistical methods used include unweighted mean, seven variants of the weighted mean, and two variants of median technique. The $R_0$ estimates obtained with these methods range from 7.91 to 8.06 kpc with uncertainties varying from 0.05 to 0.08 kpc. The final value derived in this analysis is $R_0 = 7.98 \pm 0.15\,|_{stat} \pm 0.20\,|_{syst}$ kpc, which can be recommended as the current best estimate of the Galactocentric distance of the Sun. For most of the practical applications the value of $R_0 = 8.0 \pm 0.25$ kpc can be used. 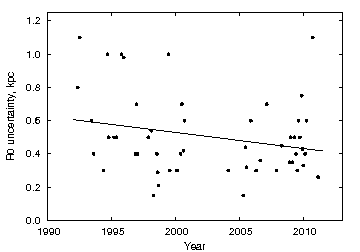