We have investigated the post-merger signatures of red-sequence galaxies in rich Abell clusters at z <~ 0.1: A119, A2670, A3330, and A389. Deep images in u', g', r', and medium-resolution galaxy spectra were taken using MOSAIC II CCD and Hydra MOS mounted on a Blanco 4 m telescope at Cerro Tololo Inter-American Observatory. Post-merger features are identified by visual inspection based on asymmetric disturbed features, faint structures, discontinuous halo structures, rings, and dust lanes. We found that ~25% of bright (Mr < -20) cluster red-sequence galaxies show post-merger signatures in four clusters consistently. Most (~71%) of the featured galaxies were found to be bulge dominated, and for the subsample of bulge-dominated red-sequence galaxies, the post-merger fraction rises to ~38%. We also found that roughly 4% of bulge-dominated red-sequence galaxies interact (ongoing merger). A total of 42% (38% post-merger, 4% ongoing merger) of galaxies show merger-related features. Compared to a field galaxy study with a similar limiting magnitude by van Dokkum in 2005, our cluster study presents a similar post-merger fraction but a markedly lower ongoing merger fraction. The merger fraction derived is surprisingly high for the high density of our clusters, where the fast internal motions of galaxies are thought to play a negative role in galaxy mergers. The fraction of post-merger and ongoing merger galaxies can be explained as follows. Most of the post-merger galaxies may have carried over their merger features from their previous halo environment, whereas interacting galaxies interact in the current cluster in situ. According to our semi-analytic calculation, massive cluster halos may very well have experienced tens of halo mergers over the last 4-5 Gyr; post-merger features last that long, allowing these features to be detected in our clusters today. The apparent lack of dependence of the merger fraction on the clustocentric distance is naturally explained this way. In this scenario, the galaxy morphology and properties can be properly interpreted only when the halo evolution characteristics are understood first. 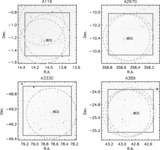