Fractional Brownian motion structures are used to investigate the dependency of column density variance (σ2 ln N ) in the turbulent interstellar medium on the variance of three-dimensional density (σ2 ln ρ) and the power-law slope of the density power spectrum. We provide quantitative expressions to infer the three-dimensional density variance, which is not directly observable, from the observable column density variance and spectral slope. We also investigate the relationship between the column density variance and sonic Mach number (M s) in the hydrodynamic (HD) regime by assuming the spectral slope and density variance to be functions of sonic Mach number, as obtained from the HD turbulence simulations. They are related by the expression σ2 ln N = Aσln ρ 2 = Aln (1 + b 2 M 2 s), suggested by Burkhart & Lazarian for the magnetohydrodynamic case. The proportional constant A varies from ≈0.2 to ≈0.4 in the HD regime as the turbulence forcing parameter b increases from 1/3 (purely solenoidal forcing) to 1 (purely compressive forcing). It is also discussed that the parameter A is lowered in the presence of a magnetic field. 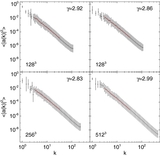