In this paper, we study the temperature and density properties of multiple structural components of coronal mass ejections (CMEs) using differential emission measure (DEM) analysis. The DEM analysis is based on the six-passband EUV observations of solar corona from the Atmospheric Imaging Assembly on board the Solar Dynamic Observatory. The structural components studied include the hot channel in the core region (presumably the magnetic flux rope of the CME), the bright loop-like leading front (LF), and coronal dimming in the wake of the CME. We find that the presumed flux rope has the highest average temperature (>8 MK) and density (~1.0 × 109 cm-3), resulting in an enhanced emission measure over a broad temperature range (3 <= T(MK) <= 20). On the other hand, the CME LF has a relatively cool temperature (~2 MK) and a narrow temperature distribution similar to the pre-eruption coronal temperature (1 <= T(MK) <= 3). The density in the LF, however, is increased by 2%-32% compared with that of the pre-eruption corona, depending on the event and location. In coronal dimmings, the temperature is more broadly distributed (1 <= T(MK) <= 4), but the density decreases by ~35%-~40%. These observational results show that: (1) CME core regions are significantly heated, presumably through magnetic reconnection; (2) CME LFs are a consequence of compression of ambient plasma caused by the expansion of the CME core region; and (3) the dimmings are largely caused by the plasma rarefaction associated with the eruption. 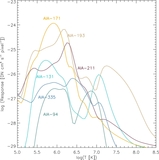