Enhancements to the science data processing pipeline of NASA's Wide-field Infrared Survey Explorer (WISE) mission, collectively known as NEOWISE, resulted in the detection of >158,000 minor planets in four infrared wavelengths during the fully cryogenic portion of the mission. Following the depletion of its cryogen, NASA's Planetary Science Directorate funded a four-month extension to complete the survey of the inner edge of the Main Asteroid Belt and to detect and discover near-Earth objects (NEOs). This extended survey phase, known as the NEOWISE Post-Cryogenic Survey, resulted in the detection of ~6500 large Main Belt asteroids and 86 NEOs in its 3.4 and 4.6 μm channels. During the Post-Cryogenic Survey, NEOWISE discovered and detected a number of asteroids co-orbital with the Earth and Mars, including the first known Earth Trojan. We present preliminary thermal fits for these and other NEOs detected during the 3-Band Cryogenic and Post-Cryogenic Surveys. 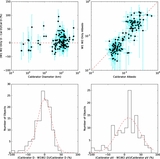