The Fermi-GBM X-Ray Burst Monitor: Thermonuclear Bursts from 4U 0614+09

Thermonuclear bursts from slowly accreting neutron stars (NSs) have proven difficult to detect, yet they are potential probes of the thermal properties of the NS interior. During the first year of a systematic all-sky search for X-ray bursts using the Gamma-ray Burst Monitor aboard the Fermi Gamma-ray Space Telescope we have detected 15 thermonuclear bursts from the NS low-mass X-ray binary 4U 0614+09 when it was accreting at nearly 1% of the Eddington limit. We measured an average burst recurrence time of 12 ± 3 days (68% confidence interval) between 2010 March and 2011 March, classified all bursts as normal duration bursts and placed a lower limit on the recurrence time of long/intermediate bursts of 62 days (95% confidence level). We discuss how observations of thermonuclear bursts in the hard X-ray band compare to pointed soft X-ray observations and quantify such bandpass effects on measurements of burst radiated energy and duration. We put our results for 4U 0614+09 in the context of other bursters and briefly discuss the constraints on ignition models. Interestingly, we find that the burst energies in 4U 0614+09 are on average between those of normal duration bursts and those measured in long/intermediate bursts. Such a continuous distribution in burst energy provides a new observational link between normal and long/intermediate bursts. We suggest that the apparent bimodal distribution that defined normal and long/intermediate duration bursts during the last decade could be due to an observational bias toward detecting only the longest and most energetic bursts from slowly accreting NSs. 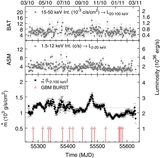