We present the surface brightness profile of M31's stellar halo out to a projected radius of 175 kpc. The surface brightness estimates are based on confirmed samples of M31 red giant branch stars derived from Keck/DEIMOS spectroscopic observations. A set of empirical spectroscopic and photometric M31 membership diagnostics is used to identify and reject foreground and background contaminants. This enables us to trace the stellar halo of M31 to larger projected distances and fainter surface brightnesses than previous photometric studies. The surface brightness profile of M31's halo follows a power law with index -2.2 ± 0.2 and extends to a projected distance of at least ~175 kpc (~2/3 of M31's virial radius), with no evidence of a downward break at large radii. The best-fit elliptical isophotes have b/a = 0.94 with the major axis of the halo aligned along the minor axis of M31's disk, consistent with a prolate halo, although the data are also consistent with M31's halo having spherical symmetry. The fact that tidal debris features are kinematically cold is used to identify substructure in the spectroscopic fields out to projected radii of 90 kpc and investigate the effect of this substructure on the surface brightness profile. The scatter in the surface brightness profile is reduced when kinematically identified tidal debris features in M31 are statistically subtracted; the remaining profile indicates that a comparatively diffuse stellar component to M31's stellar halo exists to large distances. Beyond 90 kpc, kinematically cold tidal debris features cannot be identified due to small number statistics; nevertheless, the significant field-to-field variation in surface brightness beyond 90 kpc suggests that the outermost region of M31's halo is also comprised to a significant degree of stars stripped from accreted objects.

The data presented herein were obtained at the W. M. Keck Observatory, which is operated as a scientific partnership among the California Institute of Technology, the University of California and the National Aeronautics and Space Administration. The Observatory was made possible by the generous financial support of the W. M. Keck Foundation. 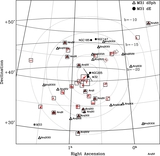