Using data obtained by the EUV Imaging Spectrometer on board Hinode, we have performed a survey of obvious and persistent (without significant damping) Doppler shift oscillations in the corona. We have found mainly two types of oscillations from February to April in 2007. One type is found at loop footpoint regions, with a dominant period around 10 minutes. They are characterized by coherent behavior of all line parameters (line intensity, Doppler shift, line width, and profile asymmetry), and apparent blueshift and blueward asymmetry throughout almost the entire duration. Such oscillations are likely to be signatures of quasi-periodic upflows (small-scale jets, or coronal counterpart of type-II spicules), which may play an important role in the supply of mass and energy to the hot corona. The other type of oscillation is usually associated with the upper part of loops. They are most clearly seen in the Doppler shift of coronal lines with formation temperatures between one and two million degrees. The global wavelets of these oscillations usually peak sharply around a period in the range of three to six minutes. No obvious profile asymmetry is found and the variation of the line width is typically very small. The intensity variation is often less than 2%. These oscillations are more likely to be signatures of kink/Alfvén waves rather than flows. In a few cases, there seems to be a π/2 phase shift between the intensity and Doppler shift oscillations, which may suggest the presence of slow-mode standing waves according to wave theories. However, we demonstrate that such a phase shift could also be produced by loops moving into and out of a spatial pixel as a result of Alfvénic oscillations. In this scenario, the intensity oscillations associated with Alfvénic waves are caused by loop displacement rather than density change. These coronal waves may be used to investigate properties of the coronal plasma and magnetic field. 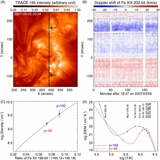