Using atomic and molecular gas observations from the GASS and COLD GASS surveys and complementary optical/UV data from the Sloan Digital Sky Survey and the Galaxy Evolution Explorer, we investigate the nature of the variations in the molecular gas depletion time observed across the local massive galaxy population. The large and unbiased COLD GASS sample allows us for the first time to statistically assess the relative importance of galaxy interactions, bar instabilities, morphologies, and the presence of active galactic nuclei (AGNs) in regulating star formation efficiency. We find that both the H2 mass fraction and depletion time vary as a function of the distance of a galaxy from the main sequence traced by star-forming galaxies in the SFR-M * plane. The longest gas depletion times are found in below-main-sequence bulge-dominated galaxies (μ* >5 × 108 M ⊙ kpc-2, C > 2.6) that are either gas-poor (M_{H_2}/M * <1.5%) or else on average less efficient by a factor of ~2 than disk-dominated galaxies at converting into stars any cold gas they may have. We find no link between the presence of AGNs and these long depletion times. In the regime where galaxies are disk-dominated and gas-rich, the galaxies undergoing mergers or showing signs of morphological disruptions have the shortest molecular gas depletion times, while those hosting strong stellar bars have only marginally higher global star formation efficiencies as compared to matched control samples. Our interpretation is that the molecular gas depletion time variations are caused by changes in the ratio between the gas mass traced by the CO(1-0) observations and the gas mass in high-density star-forming cores (as traced by observations of, e.g., HCN(1-0)). While interactions, mergers, and bar instabilities can locally increase pressure and raise the ratio of efficiently star-forming gas to CO-detected gas (therefore lowering the CO-based depletion time), massive bulges may prevent the formation of dense clumps by stabilizing gas disks against fragmentation, therefore producing the long depletion times. Building a sample representative of the local galaxy population with M * >1010 M ⊙, we derive a global Kennicutt-Schmidt star formation relation of slope 1.18 ± 0.24 and observe structure within the scatter around this relation, with galaxies having low (high) stellar mass surface densities lying systematically above (below) the mean relation, suggesting that \Sigma _H_2 is not the only parameter driving the global star formation ability of a galaxy. 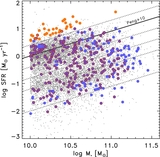