A Brightest Cluster Galaxy with an Extremely Large Flat Core

Hubble Space Telescope images of the galaxy cluster A2261, obtained as part of the Cluster Lensing And Supernova survey with Hubble, show that the brightest galaxy in the cluster, A2261-BCG, has the largest core yet detected in any galaxy. The cusp radius of A2261-BCG is 3.2 kpc, twice as big as the next largest core known, and ~3 × bigger than those typically seen in the most luminous brightest cluster galaxies. The morphology of the core in A2261-BCG is also unusual, having a completely flat interior surface brightness profile, rather than the typical shallow cusp rising into the center. This implies that the galaxy has a core with constant or even centrally decreasing stellar density. Interpretation of the core as an end product of the "scouring" action of a binary supermassive black hole implies a total black hole mass ~1010 M ⊙ from the extrapolation of most relationships between core structure and black hole mass. The core falls 1σ above the cusp radius versus galaxy luminosity relation. Its large size in real terms, and the extremely large black hole mass required to generate it, raises the possibility that the core has been enlarged by additional processes, such as the ejection of the black holes that originally generated the core. The flat central stellar density profile is consistent with this hypothesis. The core is also displaced by 0.7 kpc from the center of the surrounding envelope, consistent with a local dynamical perturbation of the core. 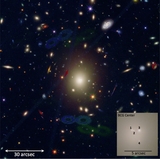