In fiber-fed galaxy redshift surveys, the finite size of the fiber plugs prevents two fibers from being placed too close to one another, limiting the ability to study galaxy clustering on all scales. We present a new method for correcting such fiber collision effects in galaxy clustering statistics based on spectroscopic observations. The target galaxy sample is divided into two distinct populations according to the targeting algorithm of fiber placement, one free of fiber collisions and the other consisting of collided galaxies. The clustering statistics are a combination of the contributions from these two populations. Our method makes use of observations in tile overlap regions to measure the contributions from the collided population, and to therefore recover the full clustering statistics. The method is rooted in solid theoretical ground and is tested extensively on mock galaxy catalogs. We demonstrate that our method can well recover the projected and the full three-dimensional (3D) redshift-space two-point correlation functions (2PCFs) on scales both below and above the fiber collision scale, superior to the commonly used nearest neighbor and angular correction methods. We discuss potential systematic effects in our method. The statistical correction accuracy of our method is only limited by sample variance, which scales down with (the square root of) the volume probed. For a sample similar to the final SDSS-III BOSS galaxy sample, the statistical correction error is expected to be at the level of 1% on scales ~0.1-30 h -1 Mpc for the 2PCFs. The systematic error only occurs on small scales, caused by imperfect correction of collision multiplets, and its magnitude is expected to be smaller than 5%. Our correction method, which can be generalized to other clustering statistics as well, enables more accurate measurements of full 3D galaxy clustering on all scales with galaxy redshift surveys. 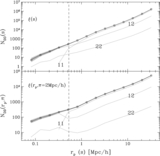