Several lines of evidence, from isotopic analyses of meteorites to studies of the Sun's elemental and isotopic composition, indicate that the solar system was contaminated early in its evolution by ejecta from a nearby supernova. Previous models have invoked supernova material being injected into an extant protoplanetary disk, or isotropically expanding ejecta sweeping over a distant (>10 pc) cloud core, simultaneously enriching it and triggering its collapse. Here, we consider a new astrophysical setting: the injection of clumpy supernova ejecta, as observed in the Cassiopeia A supernova remnant, into the molecular gas at the periphery of an H II region created by the supernova's progenitor star. To track these interactions, we have conducted a suite of high-resolution (15003 effective) three-dimensional numerical hydrodynamic simulations that follow the evolution of individual clumps as they move into molecular gas. Even at these high resolutions, our simulations do not quite achieve numerical convergence, due to the challenge of properly resolving the small-scale mixing of ejecta and molecular gas, although they do allow some robust conclusions to be drawn. Isotropically exploding ejecta do not penetrate into the molecular cloud or mix with it, but, if cooling is properly accounted for, clumpy ejecta penetrate to distances ~1018 cm and mix effectively with large regions of star-forming molecular gas. In fact, the ~2 M ⊙ of high-metallicity ejecta from a single core-collapse supernova is likely to mix with ~2 × 104 M ⊙ of molecular gas material as it is collapsing. Thus, all stars forming late (≈5 Myr) in the evolution of an H II region may be contaminated by supernova ejecta at the level ~10-4. This level of contamination is consistent with the abundances of short-lived radionuclides and possibly some stable isotopic shifts in the early solar system and is potentially consistent with the observed variability in stellar elemental abundances. Supernova contamination of forming planetary systems may be a common, universal process. 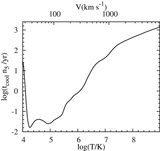