Implications for the Origin of GRB 051103 from LIGO Observations

We present the results of a LIGO search for gravitational waves (GWs) associated with GRB 051103, a short-duration hard-spectrum gamma-ray burst (GRB) whose electromagnetically determined sky position is coincident with the spiral galaxy M81, which is 3.6 Mpc from Earth. Possible progenitors for short-hard GRBs include compact object mergers and soft gamma repeater (SGR) giant flares. A merger progenitor would produce a characteristic GW signal that should be detectable at a distance of M81, while GW emission from an SGR is not expected to be detectable at that distance. We found no evidence of a GW signal associated with GRB 051103. Assuming weakly beamed γ-ray emission with a jet semi-angle of 30°, we exclude a binary neutron star merger in M81 as the progenitor with a confidence of 98%. Neutron star-black hole mergers are excluded with >99% confidence. If the event occurred in M81, then our findings support the hypothesis that GRB 051103 was due to an SGR giant flare, making it one of the most distant extragalactic magnetars observed to date. 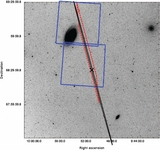