We obtain Keck HIRES spectroscopy of HVS5, one of the fastest unbound stars in the Milky Way halo. We show that HVS5 is a 3.62 ± 0.11 M ☉ main-sequence B star at a distance of 50 ± 5 kpc. The difference between its age and its flight time from the Galactic center is 105 ± 18 (stat) ±30 (sys) Myr; flight times from locations elsewhere in the Galactic disk are similar. This 108 yr "arrival time" between formation and ejection is difficult to reconcile with any ejection scenario involving massive stars that live for only 107 yr. For comparison, we derive arrival times of 107 yr for two unbound runaway B stars, consistent with their disk origin where ejection results from a supernova in a binary system or dynamical interactions between massive stars in a dense star cluster. For HVS5, ejection during the first 107 yr of its lifetime is ruled out at the 3σ level. Together with the 108 yr arrival times inferred for three other well-studied hypervelocity stars (HVSs), these results are consistent with a Galactic center origin for the HVSs. If the HVSs were indeed ejected by the central black hole, then the Galactic center was forming stars sime200 Myr ago, and the progenitors of the HVSs took sime100 Myr to enter the black hole's loss cone. 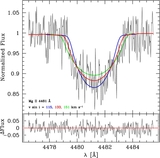