A large sample of spectroscopically confirmed star-forming galaxies at redshifts 1.4 <= z spec <= 3.7, with complementary imaging in the near- and mid-IR from the ground and from the Hubble Space Telescope and Spitzer Space Telescope, is used to infer the average star formation histories (SFHs) of typical galaxies from z ~ 2 to 7. For a subset of 302 galaxies at 1.5 <= z spec < 2.6, we perform a detailed comparison of star formation rates (SFRs) determined from spectral energy distribution (SED) modeling (SFRs[SED]) and those calculated from deep Keck UV and Spitzer/MIPS 24 μm imaging (SFRs[IR+UV]). Exponentially declining SFHs yield SFRs[SED] that are 5-10 times lower on average than SFRs[IR+UV], indicating that declining SFHs may not be accurate for typical galaxies at z >~ 2. The SFRs of z ~ 2-3 galaxies are directly proportional to their stellar masses (M *), with unity slope—a result that is confirmed with Spitzer/IRAC stacks of 1179 UV-faint ({\cal R}>25.5) galaxies—for M * >~ 5 × 108 M ⊙ and SFRs >~ 2 M ⊙ yr-1. We interpret this result in the context of several systematic biases that can affect determinations of the SFR-M * relation. The average specific SFRs at z ~ 2-3 are remarkably similar within a factor of two to those measured at z >~ 4, implying that the average SFH is one where SFRs increase with time. A consequence of these rising SFHs is that (1) a substantial fraction of UV-bright z ~ 2-3 galaxies had faint sub-L* progenitors at z >~ 4; and (2) gas masses must increase with time from z = 2 to 7, over which time the net cold gas accretion rate—as inferred from the specific SFR and the Kennicutt-Schmidt relation—is ~2-3 times larger than the SFR. However, if we evolve to higher redshift the SFHs and masses of the halos that are expected to host L* galaxies at z ~ 2, then we find that <~ 10% of the baryons accreted onto typical halos at z >~ 4 actually contribute to star formation at those epochs. These results highlight the relative inefficiency of star formation even at early cosmic times when galaxies were first assembling.

Based, in part, on data obtained at the W. M. Keck Observatory, which is operated as a scientific partnership among the California Institute of Technology, the University of California, and NASA, and made possible by the generous financial support of the W. M. Keck Foundation. 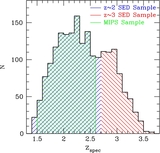