We present a multi-wavelength photometric study of ~15,000 resolved stars in the nearby spiral galaxy M83 (NGC 5236, D = 4.61 Mpc) based on Hubble Space Telescope Wide Field Camera 3 observations using four filters: F336W, F438W, F555W, and F814W. We select 50 regions (an average size of 260 pc by 280 pc) in the spiral arm and inter-arm areas of M83 and determine the age distribution of the luminous stellar populations in each region. This is accomplished by correcting for extinction toward each individual star by comparing its colors with predictions from stellar isochrones. We compare the resulting luminosity-weighted mean ages of the luminous stars in the 50 regions with those determined from several independent methods, including the number ratio of red-to-blue supergiants, morphological appearance of the regions, surface brightness fluctuations, and the ages of clusters in the regions. We find reasonably good agreement between these methods. We also find that young stars are much more likely to be found in concentrated aggregates along spiral arms, while older stars are more dispersed. These results are consistent with the scenario that star formation is associated with the spiral arms, and stars form primarily in star clusters and then disperse on short timescales to form the field population. The locations of Wolf-Rayet stars are found to correlate with the positions of many of the youngest regions, providing additional support for our ability to accurately estimate ages. We address the effects of spatial resolution on the measured colors, magnitudes, and age estimates. While individual stars can occasionally show measurable differences in the colors and magnitudes, the age estimates for entire regions are only slightly affected. 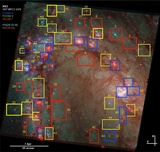