Infrared Variability of the Gliese 569B System

Gliese 569B is a multiple brown dwarf system whose exact nature has been the subject of several investigations over the past few years. Interpretation has partially relied on infrared photometry and spectroscopy of the resolved components of the system. We present seeing-limited Ks photometry over four nights, searching for variability in this young low-mass substellar system. Our photometry is consistent with other reported photometry, and we report the tentative detection of several periodic signals consistent with rotational modulation due to spots on their surfaces. The five significant periods range from 2.90 hr to 12.8 hr, with peak-to-peak variabilities from 28 mmag to 62 mmag in the Ks band. If both components are rotating with the shortest periods, then their rotation axes are not parallel with each other, and the rotation axis of the Bb component is not perpendicular to the Ba-Bb orbital plane. If Bb has one of the longer rotational periods, then the Bb rotation axis is consistent with being parallel to the orbital axis of the Ba-Bb system. 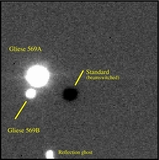