Flows at the Edge of an Active Region: Observation and Interpretation

Upflows observed at the edges of active regions have been proposed as the source of the slow solar wind. In the particular case of Active Region (AR) 10942, where such an upflow has been already observed, we want to evaluate the part of this upflow that actually remains confined in the magnetic loops that connect AR 10942 to AR 10943. Both active regions were visible simultaneously on the solar disk and were observed by STEREO/SECCHI EUVI. Using Hinode/EIS spectra, we determine the Doppler shifts and densities in AR 10943 and AR 10942 in order to evaluate the mass flows. We also perform magnetic field extrapolations to assess the connectivity between AR 10942 and AR 10943. AR 10943 displays a persistent downflow in Fe XII. Magnetic extrapolations including both ARs show that this downflow can be connected to the upflow in AR 10942. We estimate that the mass flow received by AR 10943 areas connected to AR 10942 represents about 18% of the mass flow from AR 10942. We conclude that the upflows observed on the edge of active regions represent either large-scale loops with mass flowing along them (accounting for about one-fifth of the total mass flow in this example) or open magnetic field structures where the slow solar wind originates. 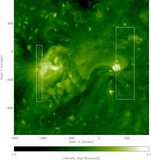