We report on the discovery of stellar occultations, observed with Kepler, which recur periodically at 15.685 hr intervals, but which vary in depth from a maximum of 1.3% to a minimum that can be less than 0.2%. The star that is apparently being occulted is KIC 12557548, a V = 16 mag K dwarf with T eff, s ~= 4400 K. The out-of-occultation behavior shows no evidence for ellipsoidal light variations, indicating that the mass of the orbiting object is less than ~3 M J (for an orbital period of 15.7 hr). Because the eclipse depths are highly variable, they cannot be due solely to transits of a single planet with a fixed size. We discuss but dismiss a scenario involving a binary giant planet whose mutual orbit plane precesses, bringing one of the planets into and out of a grazing transit. This scenario seems ruled out by the dynamical instability that would result from such a configuration. We also briefly consider an eclipsing binary, possibly containing an accretion disk, that either orbits KIC 12557548 in a hierarchical triple configuration or is nearby on the sky, but we find such a scenario inadequate to reproduce the observations. The much more likely explanation—but one which still requires more quantitative development—involves macroscopic particles escaping the atmosphere of a slowly disintegrating planet not much larger than Mercury in size. The particles could take the form of micron-sized pyroxene or aluminum oxide dust grains. The planetary surface is hot enough to sublimate and create a high-Z atmosphere; this atmosphere may be loaded with dust via cloud condensation or explosive volcanism. Atmospheric gas escapes the planet via a Parker-type thermal wind, dragging dust grains with it. We infer a mass-loss rate from the observations of order 1 M ⊕ Gyr-1, with a dust-to-gas ratio possibly of order unity. For our fiducial 0.1 M ⊕ planet (twice the mass of Mercury), the evaporation timescale may be ~0.2 Gyr. Smaller mass planets are disfavored because they evaporate still more quickly, as are larger mass planets because they have surface gravities too strong to sustain outflows with the requisite mass-loss rates. The occultation profile evinces an ingress-egress asymmetry that could reflect a comet-like dust tail trailing the planet; we present simulations of such a tail. 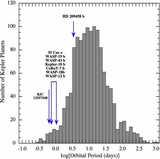