We examine the star-forming history of the M31 disk during the past few hundred Myr. The luminosity functions (LFs) of main-sequence stars at distances R GC > 21 kpc (i.e., >4 disk scale lengths) are matched by models that assume a constant star formation rate (SFR). However, at smaller R GC the LFs suggest that during the past ~10 Myr the SFR was 2-3 times higher than during the preceding ~100 Myr. The rings of cool gas that harbor a significant fraction of the current star-forming activity are traced by stars with ages ~100 Myr, indicating that (1) these structures have ages of at least 100 Myr and (2) stars in these structures do not follow the same relation between age and random velocity as their counterparts throughout the disks of other spiral galaxies, probably due to the inherently narrow orbital angular momentum distribution of the giant molecular clouds in these structures. The distribution of evolved red stars is not azimuthally symmetric, in the sense that the projected density along the northeast segment of the major axis is roughly twice that on the opposite side of the galaxy. The northeast arm of the major axis thus appears to be a fossil star-forming area that dates to intermediate epochs. Such a structure may be the consequence of interactions with a companion galaxy.

Based on observations obtained with MegaPrime/MegaCam, a joint project of CFHT and CEA/DAPNIA, at the Canada-France-Hawaii Telescope (CFHT), which is operated by the National Research Council (NRC) of Canada, the Institut National des Sciences de l'Univers of the Centre National de la Recherche Scientifique (CNRS) of France, and the University of Hawaii. 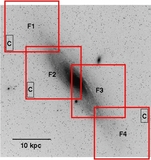