Profiles of Lyα Emission Lines of the Emitters at z = 3.1

We present the results of the observations of the Lyα line profiles of 91 emission-line galaxies at z = 3.1 with a spectral resolution of λ/δλ(FWHM) ≈1700 or 180 km s-1. A significant fraction of ~50% of the observed objects show the characteristic double peaks in their Lyα profile. The red peak is much stronger than the blue one for most of the cases. The red peaks themselves also show weak but significant asymmetry and their widths are correlated with the velocity separation of the red and the blue peaks. This implies that the peaks are not isolated multiple components with different velocities but parts of a single line that are modified by the absorption and/or scattering by the associated neutral hydrogen gas. The characteristic profile can be naturally explained by scattering in the expanding shell of the neutral hydrogen surrounding the Lyα emitting region while the attenuation by the intergalactic medium should also be considered. Our results suggest that the star formation in these Lyα emitters are dominated by young burst-like events that produce the intrinsic Lyα emission as well as the gas outflow. 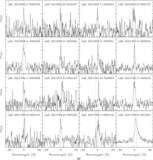