We describe the infrared properties of sources detected over ~36 deg2 of sky in the GAMA 15 hr equatorial field, using data from both the Herschel Astrophysical Terahertz Large-Area Survey (H-ATLAS) and Wide-field Infrared Survey (WISE). With 5σ point-source depths of 34 and 0.048 mJy at 250 μm and 3.4 μm, respectively, we are able to identify 50.6% of the H-ATLAS sources in the WISE survey, corresponding to a surface density of ~630 deg-2. Approximately two-thirds of these sources have measured spectroscopic or optical/near-IR photometric redshifts of z < 1. For sources with spectroscopic redshifts at z < 0.3, we find a linear correlation between the infrared luminosity at 3.4 μm and that at 250 μm, with ±50% scatter over ~1.5 orders of magnitude in luminosity, ~109-1010.5 L ⊙. By contrast, the matched sources without previously measured redshifts (r >~ 20.5) have 250-350 μm flux density ratios which suggest either high-redshift galaxies (z >~ 1.5) or optically faint low-redshift galaxies with unusually low temperatures (T <~ 20). Their small 3.4-250 μm flux ratios favor a high-redshift galaxy population, as only the most actively star-forming galaxies at low redshift (e.g., Arp 220) exhibit comparable flux density ratios. Furthermore, we find a relatively large active galactic nucleus fraction (~30%) in a 12 μm flux-limited subsample of H-ATLAS sources, also consistent with there being a significant population of high-redshift sources in the no-redshift sample. 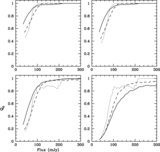