We report the discovery of an interesting and rare rectangular-shaped galaxy. At a distance of 21 Mpc, the dwarf galaxy LEDA 074886 has an absolute R-band magnitude of -17.3 mag. Adding to this galaxy's intrigue is the presence of an embedded, edge-on stellar disk (of extent 2 R e, disk = 12'' = 1.2 kpc) for which Forbes et al. reported v rot/σ ≈ 1.4. We speculate that this galaxy may be the remnant of two (nearly edge-on) merged disk galaxies in which the initial gas was driven inward and subsequently formed the inner disk, while the stars at larger radii effectively experienced a dissipationless merger event resulting in this "emerald cut galaxy" having very boxy isophotes with a 4/a = -0.05 to -0.08 from 3 to 5 kpc. This galaxy suggests that knowledge from simulations of both "wet" and "dry" galaxy mergers may need to be combined to properly understand the various paths that galaxy evolution can take, with a particular relevance to blue elliptical galaxies. 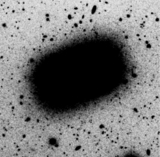