Eighty planetary systems of two or more planets are known to orbit stars other than the Sun. For most, the data can be sufficiently explained by non-interacting Keplerian orbits, so the dynamical interactions of these systems have not been observed. Here we present four sets of light curves from the Kepler spacecraft, each which of shows multiple planets transiting the same star. Departure of the timing of these transits from strict periodicity indicates that the planets are perturbing each other: the observed timing variations match the forcing frequency of the other planet. This confirms that these objects are in the same system. Next we limit their masses to the planetary regime by requiring the system remain stable for astronomical timescales. Finally, we report dynamical fits to the transit times, yielding possible values for the planets' masses and eccentricities. As the timespan of timing data increases, dynamical fits may allow detailed constraints on the systems' architectures, even in cases for which high-precision Doppler follow-up is impractical. 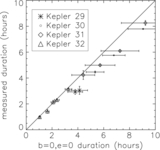