Tadpole galaxies have a giant star-forming region at the end of an elongated intensity distribution. Here we use Sloan Digital Sky Survey data to determine the ages, masses, and surface densities of the heads and tails in 14 local tadpoles selected from the Kiso and Michigan surveys of UV-bright galaxies, and we compare them to tadpoles previously studied in the Hubble Ultra Deep Field. The young stellar mass in the head scales linearly with rest-frame galaxy luminosity, ranging from ~105 M ⊙ at galaxy absolute magnitude U = -13 mag to 109 M ⊙ at U = -20 mag. The corresponding head surface density increases from several M ⊙ pc-2 locally to 10-100 M ⊙ pc-2 at high redshift, and the star formation rate (SFR) per unit area in the head increases from ~0.01 M ⊙ yr-1 kpc-2 locally to ~1 M ⊙ yr-1 kpc-2 at high z. These local values are normal for star-forming regions, and the increases with redshift are consistent with other cosmological SFRs, most likely reflecting an increase in gas abundance. The tails in the local sample look like bulge-free galaxy disks. Their photometric ages decrease from several Gyr to several hundred Myr with increasing z, and their surface densities are more constant than the surface densities of the heads. The far-outer intensity profiles in the local sample are symmetric and exponential. We suggest that most local tadpoles are bulge-free galaxy disks with lopsided star formation, perhaps from environmental effects such as ram pressure or disk impacts, or from a Jeans length comparable to half the disk size. 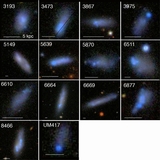