We present results of general relativistic simulations of collapsing supermassive stars with and without rotation using the two-dimensional general relativistic numerical code Nada, which solves the Einstein equations written in the BSSN formalism and the general relativistic hydrodynamic equations with high-resolution shock-capturing schemes. These numerical simulations use an equation of state that includes the effects of gas pressure and, in a tabulated form, those associated with radiation and the electron-positron pairs. We also take into account the effect of thermonuclear energy released by hydrogen and helium burning. We find that objects with a mass of ≈5 × 105 M ⊙ and an initial metallicity greater than Z CNO ≈ 0.007 do explode if non-rotating, while the threshold metallicity for an explosion is reduced to Z CNO ≈ 0.001 for objects uniformly rotating. The critical initial metallicity for a thermonuclear explosion increases for stars with a mass ≈106 M ⊙. For those stars that do not explode, we follow the evolution beyond the phase of black hole (BH) formation. We compute the neutrino energy loss rates due to several processes that may be relevant during the gravitational collapse of these objects. The peak luminosities of neutrinos and antineutrinos of all flavors for models collapsing to a BH are L ν ~ 1055 erg s-1. The total radiated energy in neutrinos varies between E ν ~ 1056 erg for models collapsing to a BH and E ν ~ 1045-1046 erg for models exploding. 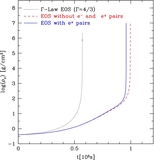