What can We Learn about Solar Coronal Mass Ejections, Coronal Dimmings, and Extreme-ultraviolet Jets through Spectroscopic Observations?

Solar eruptions, particularly coronal mass ejections (CMEs) and extreme-ultraviolet (EUV) jets, have rarely been investigated with spectroscopic observations. We analyze several data sets obtained by the EUV Imaging Spectrometer on board Hinode and find various types of flows during CMEs and jet eruptions. CME-induced dimming regions are found to be characterized by significant blueshift and enhanced line width by using a single Gaussian fit, while a red-blue (RB) asymmetry analysis and an RB-guided double Gaussian fit of the coronal line profiles indicate that these are likely caused by the superposition of a strong background emission component and a relatively weak (~10%), high-speed (~100 km s-1) upflow component. This finding suggests that the outflow velocity in the dimming region is probably of the order of 100 km s-1, not ~20 km s-1 as reported previously. These weak, high-speed outflows may provide a significant amount of mass to refill the corona after the eruption of CMEs, and part of them may experience further acceleration and eventually become solar wind streams that can serve as an additional momentum source of the associated CMEs. Density and temperature diagnostics of the dimming region suggest that dimming is primarily an effect of density decrease rather than temperature change. The mass losses in dimming regions as estimated from different methods are roughly consistent with each other, and they are 20%-60% of the masses of the associated CMEs. With the guide of RB asymmetry analysis, we also find several temperature-dependent outflows (speed increases with temperature) immediately outside the (deepest) dimming region. These outflows may be evaporation flows that are caused by the enhanced thermal conduction or nonthermal electron beams along reconnecting field lines, or induced by the interaction between the opened field lines in the dimming region and the closed loops in the surrounding plage region. In an erupted CME loop and an EUV jet, profiles of emission lines formed at coronal and transition region temperatures are found to exhibit two well-separated components, an almost stationary component accounting for the background emission and a highly blueshifted (~200 km s-1) component representing emission from the erupting material. The two components can easily be decomposed through a double Gaussian fit, and we can diagnose the electron density, temperature, and mass of the ejecta. Combining the speed of the blueshifted component and the projected speed of the erupting material derived from simultaneous imaging observations, we can calculate the real speed of the ejecta. 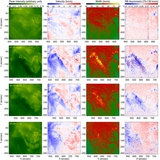