The Clustered Nature of Star Formation. Pre-main-sequence Clusters in the Star-forming Region NGC 602/N90 in the Small Magellanic Cloud

Located at the tip of the wing of the Small Magellanic Cloud (SMC), the star-forming region NGC 602/N90 is characterized by the H II nebular ring N90 and the young cluster of pre-main-sequence (PMS) and early-type main-sequence stars NGC 602, located in the central area of the ring. We present a thorough cluster analysis of the stellar sample identified with Hubble Space Telescope/Advanced Camera for Surveys in the region. We show that apart from the central cluster low-mass PMS stars are congregated in 13 additional small, compact sub-clusters at the periphery of NGC 602, identified in terms of their higher stellar density with respect to the average background density derived from star counts. We find that the spatial distribution of the PMS stars is bimodal, with an unusually large fraction (~60%) of the total population being clustered, while the remaining is diffusely distributed in the intercluster area, covering the whole central part of the region. From the corresponding color-magnitude diagrams we disentangle an age difference of ~2.5 Myr between NGC 602 and the compact sub-clusters, which appear younger, on the basis of comparison of the brighter PMS stars with evolutionary models, which we accurately calculated for the metal abundance of the SMC. The diffuse PMS population appears to host stars as old as those in NGC 602. Almost all detected PMS sub-clusters appear to be centrally concentrated. When the complete PMS stellar sample, including both clustered and diffused stars, is considered in our cluster analysis, it appears as a single centrally concentrated stellar agglomeration, covering the whole central area of the region. Considering also the hot massive stars of the system, we find evidence that this agglomeration is hierarchically structured. Based on our findings, we propose a scenario according to which the region NGC 602/N90 experiences an active clustered star formation for the last ~5 Myr. The central cluster NGC 602 was formed first and rapidly started dissolving into its immediate ambient environment, possibly ejecting also massive stars found away from its center. Star formation continued in sub-clusters of a larger stellar agglomeration, introducing an age spread of the order of 2.5 Myr among the PMS populations.

Based on observations made with the NASA/ESA Hubble Space Telescope, obtained at the Space Telescope Science Institute, which is operated by the Association of Universities for Research in Astronomy, Inc., under NASA contract NAS 5-26555. 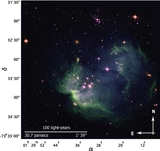