It has long been suspected that metal-polluted white dwarfs (types DAZ, DBZ, and DZ) and white dwarfs with dusty disks possess planetary systems, but a specific physical mechanism by which planetesimals are perturbed close to a white dwarf has not yet been fully posited. In this paper, we demonstrate that mass loss from a central star during post-main-sequence evolution can sweep planetesimals into interior mean motion resonances with a single giant planet. These planetesimals are slowly removed through chaotic excursions of eccentricity that in time create radial orbits capable of tidally disrupting the planetesimal. Numerical N-body simulations of the solar system show that a sufficient number of planetesimals are perturbed to explain white dwarfs with both dust and metal pollution, provided other white dwarfs have more massive relic asteroid belts. Our scenario requires only one Jupiter-sized planet and a sufficient number of asteroids near its 2:1 interior mean motion resonance. Finally, we show that once a planetesimal is perturbed into a tidal crossing orbit, it will become disrupted after the first pass of the white dwarf, where a highly eccentric stream of debris forms the main reservoir for dust-producing collisions. These simulations, in concert with observations of white dwarfs, place interesting limits on the frequency of planetary systems around main-sequence stars, the frequency of planetesimal belts, and the probability that dust may obscure future terrestrial planet finding missions. 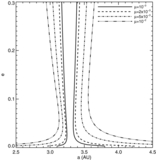