CS Cha is a binary system surrounded by a circumbinary disk. We construct a model for the inner disk regions and compare the resulting synthetic spectral energy distribution (SED) with Infrared Spectrograph spectra of CS Cha taken at two different epochs. For our model, we adopt a non-axisymmetric mass distribution from results of published numerical simulations of the interaction between a circumbinary disk and a binary system, where each star is surrounded by a disk. In particular, we approximate the streams of mass from which the inner circumstellar disks accrete from the circumbinary disk. This structure is due to the gravitational interaction of the stars with the disk, in which an array of disks and streams is formed in an inner hole. We calculate the temperature distribution of the optically thin dust in these inner regions considering the variable impinging radiation from both stars and use the observations to estimate the mass variations in the streams. We find that the SEDs for both epochs can be explained with emission from an optically thick inner edge of the circumbinary disk and from the optically thin streams that connect the circumbinary disk with the two smaller circumstellar disks. To the best of our knowledge, this is the first time that the emission from the optically thin material in the hole, suggested by the theory, is tested against observations of a binary system. 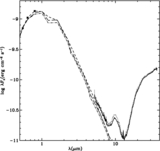