Results of recent observations of the Galactic bulge demand that we discard a simple picture of its formation, suggesting the presence of two stellar populations represented by two peaks of stellar metallicity distribution (MDF) in the bulge. To assess this issue, we construct Galactic chemical evolution models that have been updated in two respects: first, the delay time distribution of Type Ia supernovae (SNe Ia) recently revealed by extensive SN Ia surveys is incorporated into the models. Second, the nucleosynthesis clock, the s-processing in asymptotic giant branch stars, is carefully considered in this study. This novel model first shows that the Galaxy feature tagged by the key elements, Mg, Fe, and Ba, for the bulge as well as thin and thick disks is compatible with a short-delay SN Ia. We present a successful modeling of a two-component bulge including the MDF and the evolutions of [Mg/Fe] and [Ba/Mg], and reveal its origin as follows. A metal-poor component (lang[Fe/H]rang ~ -0.5) is formed with a relatively short timescale of ~1 Gyr. These properties are identical to the thick disk's characteristics in the solar vicinity. Subsequently from its remaining gas mixed with a gas flow from the disk outside the bulge, a metal-rich component (lang[Fe/H]rang ~ +0.3) is formed with a longer timescale (~4 Gyr) together with a top-heavy initial mass function that might be identified with the thin disk component within the bulge. 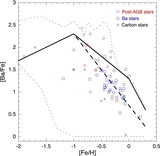