Observed spectra of R Coronae Borealis (RCB) and hydrogen-deficient carbon (HdC) stars are analyzed by synthesizing the C2 Swan bands (1, 0), (0, 0), and (0, 1) using our detailed line list and the Uppsala model atmospheres. The (0, 1) and (0, 0) C2 bands are used to derive the 12C abundance, and the (1, 0) 12C13C band to determine the 12C/13C ratios. The carbon abundance derived from the C2 Swan bands is about the same for the adopted models constructed with different carbon abundances over the range 8.5 (C/He = 0.1%) to 10.5 (C/He = 10%). Carbon abundances derived from C I lines are about a factor of four lower than the carbon abundance of the adopted model atmosphere over the same C/He interval, as reported by Asplund et al., who dubbed the mismatch between adopted and derived C abundance as the "carbon problem." In principle, the carbon abundances obtained from C2 Swan bands and that assumed for the model atmosphere can be equated for a particular choice of C/He that varies from star to star. Then, the carbon problem for C2 bands is eliminated. However, such C/He ratios are in general less than those of the extreme helium stars, the seemingly natural relatives to the RCB and HdC stars. A more likely solution to the C2 carbon problem may lie in a modification of the model atmosphere's temperature structure. The derived carbon abundances and the 12C/13C ratios are discussed in light of the double degenerate and the final flash scenarios. 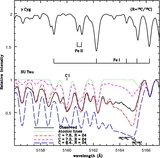