VLBA Determination of the Distance to nearby Star-forming Regions. V. Dynamical Mass, Distance, and Radio Structure of V773 Tau A

We present multi-epoch Very Long Baseline Array (VLBA) observations of V773 Tau A, the 51 day binary subsystem in the multiple young stellar system V773 Tau. Combined with previous interferometric and radial velocity measurements, these new data enable us to improve the characterization of the physical orbit of the A subsystem. In particular, we infer updated dynamical masses for the primary and the secondary components of 1.55 ± 0.11 M ⊙ and 1.293 ± 0.068 M ⊙, respectively, and an updated orbital parallax distance to the system of 135.7 ± 3.2 pc, all consistent with previous estimates. Using the improved orbit, we can calculate the absolute coordinates of the barycenter of V773 Tau A at each epoch of our VLBA observations, and fit for its trigonometric parallax and proper motion. This provides a direct measurement of the distance to the system almost entirely independent of the orbit modeling. The best fit yields a distance of 129.9 ± 3.2 pc, in good agreement (i.e., within 1σ) with the distance estimate based on the orbital fit. Taking the mean value of the orbital and trigonometric parallaxes, we conclude that V773 Tau is located at d = 132.8 ± 2.3 pc. The accuracy of this determination is nearly one order of magnitude better than that of previous estimates. In projection, V773 Tau and two other young stars (Hubble 4 and HDE 283572) recently observed with the VLBA are located toward the dark cloud Lynds 1495, in the central region of Taurus. These three stars appear to have similar trigonometric parallaxes, radial velocities, and proper motions, and we argue that the weighted mean and dispersion of their distances (d = 131.4 pc and σ d = 2.4 pc) provide a good estimate of the distance to and depth of Lynds 1495 and its associated stellar population. The radio emission from the two sources in V773 Tau A is largely of gyrosynchrotron origin. Interestingly, both sources are observed to become typically five times brighter near periastron than near apastron (presumably because of increased flaring activity), and the separation between the radio sources near periastron appears to be systematically smaller than the separation between the stars. While this clearly indicates some interaction between the individual magnetospheres, the exact mechanisms at play are unclear because even at periastron the separation between the stars (~30 R *) remain much larger than the radius of the magnetospheres around these low-mass young stars (~6 R *). 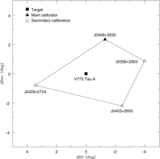