We present seven newly discovered non-eclipsing short-period binary systems with low-mass companions, identified by the recently introduced BEER algorithm, applied to the publicly available 138-day photometric light curves obtained by the Kepler mission. The detection is based on the beaming effect (sometimes called Doppler boosting), which increases (decreases) the brightness of any light source approaching (receding from) the observer, enabling a prediction of the stellar Doppler radial-velocity (RV) modulation from its precise photometry. The BEER algorithm identifies the BEaming periodic modulation, with a combination of the well-known Ellipsoidal and Reflection/heating periodic effects, induced by short-period companions. The seven detections were confirmed by spectroscopic RV follow-up observations, indicating minimum secondary masses in the range 0.07-0.4 M ⊙. The binaries discovered establish for the first time the feasibility of the BEER algorithm as a new detection method for short-period non-eclipsing binaries, with the potential to detect in the near future non-transiting brown-dwarf secondaries, or even massive planets. 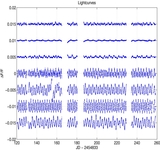