This is the second in a series of papers discussing the process and effects of star formation in the self-gravitating disk around the supermassive black holes in active galactic nuclei (AGNs). We have previously suggested that warm skins are formed above the star-forming (SF) disk through the diffusion of warm gas driven by supernova explosions. Here we study the evolution of the warm skins when they are exposed to the powerful radiation from the inner part of the accretion disk. The skins initially are heated to the Compton temperature, forming a Compton atmosphere (CAS) whose subsequent evolution is divided into four phases. Phase I is the duration of pure accumulation supplied by the SF disk. During phase II clouds begin to form due to line cooling and sink to the SF disk. Phase III is a period of preventing clouds from sinking to the SF disk through dynamic interaction between clouds and the CAS because of the CAS overdensity driven by continuous injection of warm gas from the SF disk. Finally, phase IV is an inevitable collapse of the entire CAS through line cooling. This CAS evolution drives the episodic appearance of broad-line regions (BLRs). We follow the formation of cold clouds through the thermal instability of the CAS during phases II and III, using linear analysis. Since the clouds are produced inside the CAS, the initial spatial distribution of newly formed clouds and angular momentum naturally follow the CAS dynamics, producing a flattened disk of clouds. The number of clouds in phases II and III can be estimated, as well as the filling factor of clouds in the BLR. Since the cooling function depends on the metallicity, the metallicity gradients that originate in the SF disk give rise to different properties of clouds in different radial regions. We find from the instability analysis that clouds have column density N H <~ 1022 cm-2 in the metal-rich regions whereas they have N H >~ 1022 cm-2 in the metal-poor regions. The metal-rich clouds compose the high-ionization line regions whereas the metal-poor clouds are in low-ionization line (LIL) regions. Since metal-rich clouds are optically thin, they will be blown away by radiation pressure, forming the observed outflows. The outflowing clouds could set up a metallicity correlation between the BLRs and narrow-line regions. The LIL regions are episodic due to the mass cycle of clouds with the CAS in response to continuous injection by the SF disk, giving rise to different types of AGNs. Based on Sloan Digital Sky Survey quasar spectra, we identify a spectral sequence in light of emission-line equivalent width from phase I to IV. A key phase in the episodic appearance of the BLRs is bright type II AGNs with no or only weak BLRs, contrary to the popular picture in which the absence of a BLR is due to a low accretion rate. We discuss observational implications and tests of the theoretical predictions of this model. 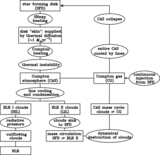